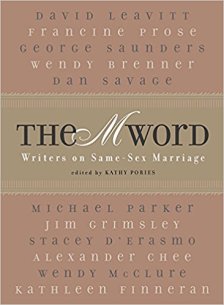 I’ve wanted to find a book for same gender and queer couples to even out the playing field, if you will. I know many TLBGQI individuals already argued against marriage before it was a civil right (limited). So I wasn’t sure what I was in for. But here you have it, Writers on Same Sex Marriage, which indicates they are not necessarily going to be writing the same thesis and from the same perspective. This includes 11 gay and straight writers.

One quote stuck out to me from Stacey D’Erasmo.

The good marriage, to me, is less license than it is tattoo, the conscious acknowledgement that we mark one another , change one another. …It would be a very different spectacle if, instead of lining up outside city halls for marriage licenses, gay people were lining up to tattoo one another.”

Instead of simply suggesting you put your middle finger up to the institution, possible create your own version of what a commitment looks like. It’s not a simple set of steps to follow, but a complicated push and pull between two changing people. Stacey D’Etasmo’s essay is entitled The Good Marriage; or, The Kiss of the Fat Man. As she discusses an older film she loves to watch, she identifies a question the film is asking: what is a good marriage? She thinks, “[in] the ambivalent persona of the curious bride, the complicatedly happy ending, the movie poses a question…” I’m sure there are so many different interpretations for what a good marriage is that few people would agree on an exact version of someone else’s.

She also reflects on her own family members, her grandmother and grandfather, having shared over 60 years together. It is often thought of as impressive for a couple to stay together that long but it’s to assume all those years were happy. Or easy. It’s the staying

together that imprinted on her, the not leaving simply because you’re now different and complications have arisen. She writes “[to] my mind , the good marriage is not one in which both people are securely self-enclosed, mutually reflective spheres, but the opposite. The good marriage is one in which both people in it can bear the vulnerability of the knowledge that neither of them is capable; of sole possession of the realm…”

There are many more readings to peruse in this small book. A perfect traveling companion for when you want something to consider but may not want to be married to it. : ) You may agree, disagree, or find that there are new ideas or shapes to examine. Imagine pondering being married for health care and tax breaks. Reflect on the anger of conforming to socially constructed institutions that trap the poor and benefit the wealthy. Sometimes we tell stories of making mistakes: like marrying the one you love only to find out they cannot love you they way you need to be loved. Sometimes we tell stories of triumph: like finding the partner of a lifetime, at the end of yours.

“One man's constant is another man's variable.” Alan Perlis